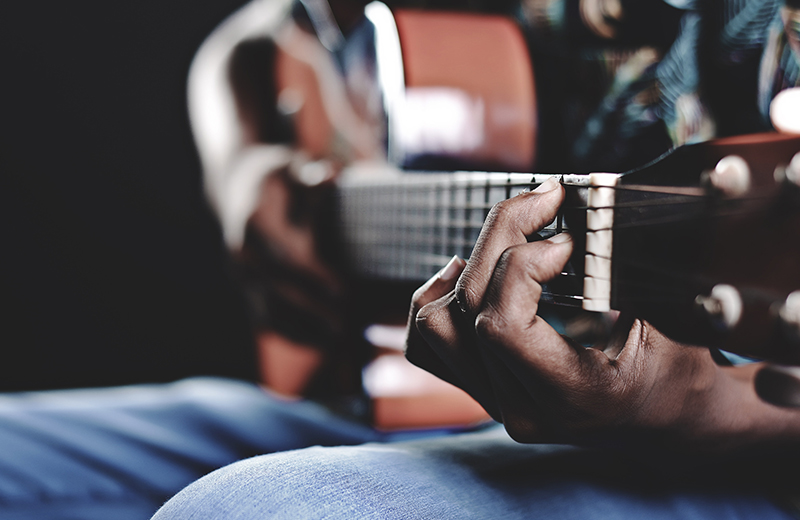 It is easy for beginners to pick up some guitar playing skills to be able to play songs on a basic level, or at least be able to play basic songs with ease. However, in order to become a good guitarist, just simple strumming and correct finger placement on frets is not enough!

Here are 3 professional tricks that you can practise in order to add more dimension to your guitar playing (and make you look and sound more impressive):

The finger style playing method is currently one of the more popular guitar techniques that players wish to master, as it will really add so much more texture and dimension to your playing skill.

It is a common beginner mistake for guitar students when they wish to use all 5 fingers right at the beginning when they are just starting to learn this technique, as most of the time, the last finger has less action than the rest of the fingers.

And so, for guitar beginners, we recommend just playing this style with your thumb, index, middle and ring finger for now. That should be sufficient for you to begin learning and mastering this great playing technique, and be able to play a variety of songs using this finger style method.

Next, another major concern is regarding fingernails. There is a general misconception that we need to grow long fingernails in order to be able to play this style!

However, you can use just your finger tips to play finger style playing. The difference lies in the tone that is being produced, as your finger tips and fingernails will produce tones of varying brightness and harshness.

It is quite common to note that some guitarists would even put on fake nails in order to achieve a brighter playing sound. However, at this beginning stage, we recommend that you work on mastering the proper playing techniques, rather than worrying about the length of your fingernails, or where to buy fake nails!

Here are some useful pointers that you need to take note of when you are just starting out to learn this finger style playing technique:

Know Which Fingers To Play On What String

It is certainly important to know which fingers can cover what strings, because this makes it easier for our brain to assign the appropriate finger when playing.

Usually our thumb covers the E, A and D strings, whereas our index finger is responsible for the G and B strings. As for the middle finger, it will cover the high E string. This is one of the recommended ways of finger assignment for strings.

Of course, there are also many different ways to pick the strings, like the PIMA method . The main thing is finding the one method that is most comfortable for you personally.

Here at Intune Music, our guitar instructors are all qualified to teach, and they also have many years of playing and teaching experience with regards to guitar and related string instruments. We will most certainly be able to help you find your most suitable finger style method for guitar playing!

Contact us at 63360335 or friends@intunemusic.com.sg to arrange for a trial lesson today!

Usually when we are just starting out to learn this finger style method, your fingers may not be used to picking the strings. You might be more used to just strumming with your fingers or nails, and so you need to spend more time practising picking at each string with the corresponding and most appropriate finger for you to do so.

With each new skill and instrument that you pick up, it is always super important that you remain patient, especially in the beginning stages as that is where the learning curve is steeper.

Each finger style exercise may be tedious and take up a lot of time, but it is absolutely necessary for us to work on our playing foundation so as to be able to ultimately master this unique playing style.

Wish to know what guitar playing exercises are there for you to practise on? Take a guitar trial lesson with us and have our experienced guitar instructors guide you through step-by-step!

Now this 2nd playing technique allows you to imitate the sound of a snare drum by ‘slapping’ on the guitar strings while you play the guitar. This provides you with more dynamics in your playing!

Some examples of songs that use this technique include Jason Mraz’s “I’m Yours”, as well as Daft Punk’s “Get Lucky”. In these songs, the thumb slap technique adds more dimension and dynamics to the guitar playing.

Here are some useful pointers for beginners who are just starting to pick up this technique:

To slap the strings, you need to be using the outer side of the first knuckle of your thumb. This is so that when you slap on the strings to the fretboard at the last fret, by the sound hole of the guitar, it will create more of a ‘snare’ sound effect.

It is common for beginner students who just started to practise the technique, to tend to slap the strings from the top just like how they would strum the guitar. However, the movement should be directly slapping onto the strings.

Try to visualize this in order to get the correct movement:

Open our left hand, and place your middle finger of your right hand on your left palm. Then, pivot on that middle finger, turning your wrist back and forth and getting used to that pivoting action, which is absolutely crucial when practising the thumb slap technique.

Get used to this pivoting action in order to avoid accidentally strumming the strings while doing this.

Mind the Speed and Accuracy

Generally, you should be hitting the 6th String (Low E String), but sometimes beginners might accidentally hit the 5th String (A String). That is also ok, but there might also be times when you hit the body of the guitar by mistake, and doing that might throw you off tempo and rhythm because you might be taken by surprise.

So, get more familiar with the guitar string positions, and with constant practice using the correct techniques and posture, you will gradually begin to master this thumb slap technique and be able to do it faster and more accurately!

The Pull-Off technique is one of the essential techniques that every guitarist should possess, and once you have mastered this technique, it will make you a faster and more precise guitar player!

So, what exactly do the Pull-Off and the Hammer-On techniques do, and why do guitarists have to learn them? In very simple and layman terms, these techniques provide you with 2 notes when you only play 1 note. (1 stone kill 2 birds!)

One of the common problems that beginners would face with this technique is that when you release the fretting finger, the pull of the note will immediately disappear or become silent really quickly.

Ideally, the first played note and the pull-off note should have similar note volumes, so how should we overcome this problem?

The key lies in this word. SPEED.

You need to release the fretting finger as fast as you can, because the longer your finger is on the string, the more it absorbs the pull-off note, and this is something you need to avoid when you are learning to master this playing technique.

Sometimes, even after mastering the above point about speed, you may still notice that the sound of the pull-off note will still be less audible than the first played note, as sound waves lose their energy as they travel.

And so, what else can we do to make the pull-off note louder?

This has a pitfall though, because sometimes you may run into the next string and your playing technique will start to sound sloppy and messy.

In order to learn more ways to overcome sloppy and messy playing, do sign up for our guitar trial lesson so that you can learn to become a more awesome and technical guitar player!

Thank you once again for reading this long article, and we hope that the above 3 tricks will help you to become a more masterful guitar player!

Till the next article, have fun and keep playing music!